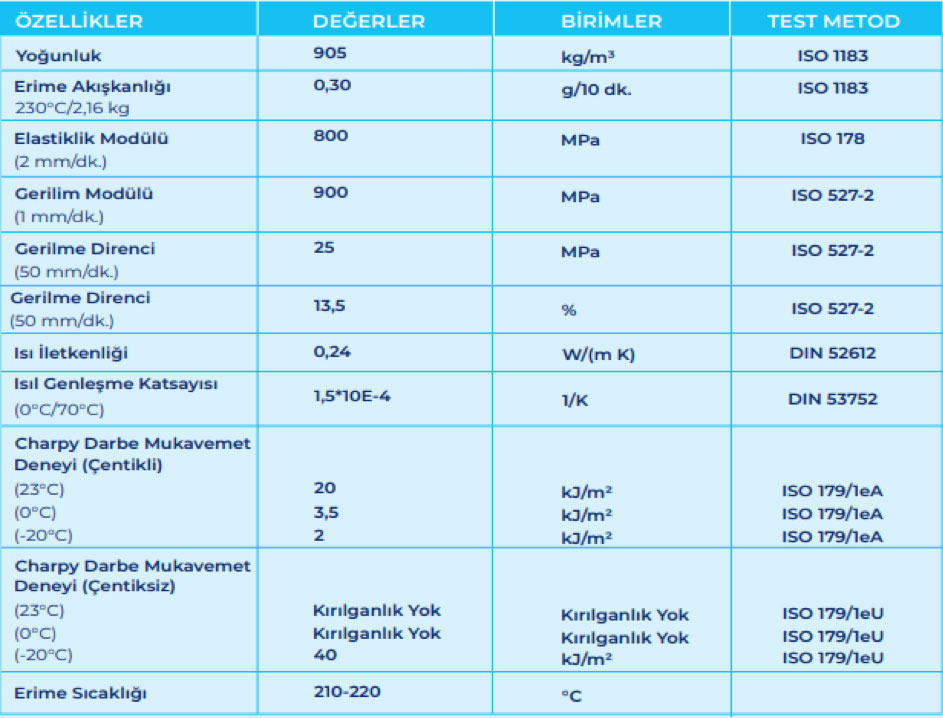 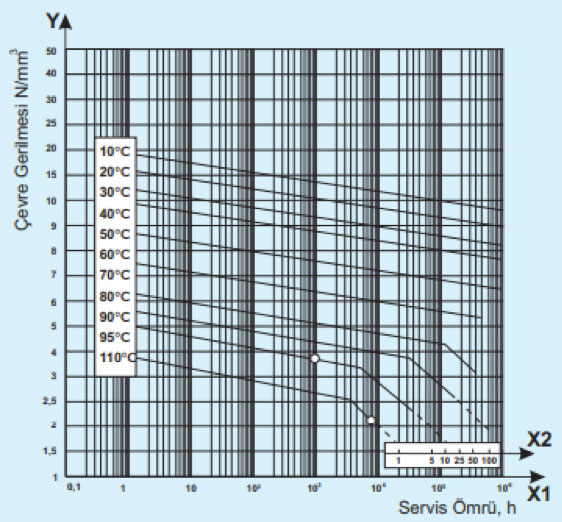 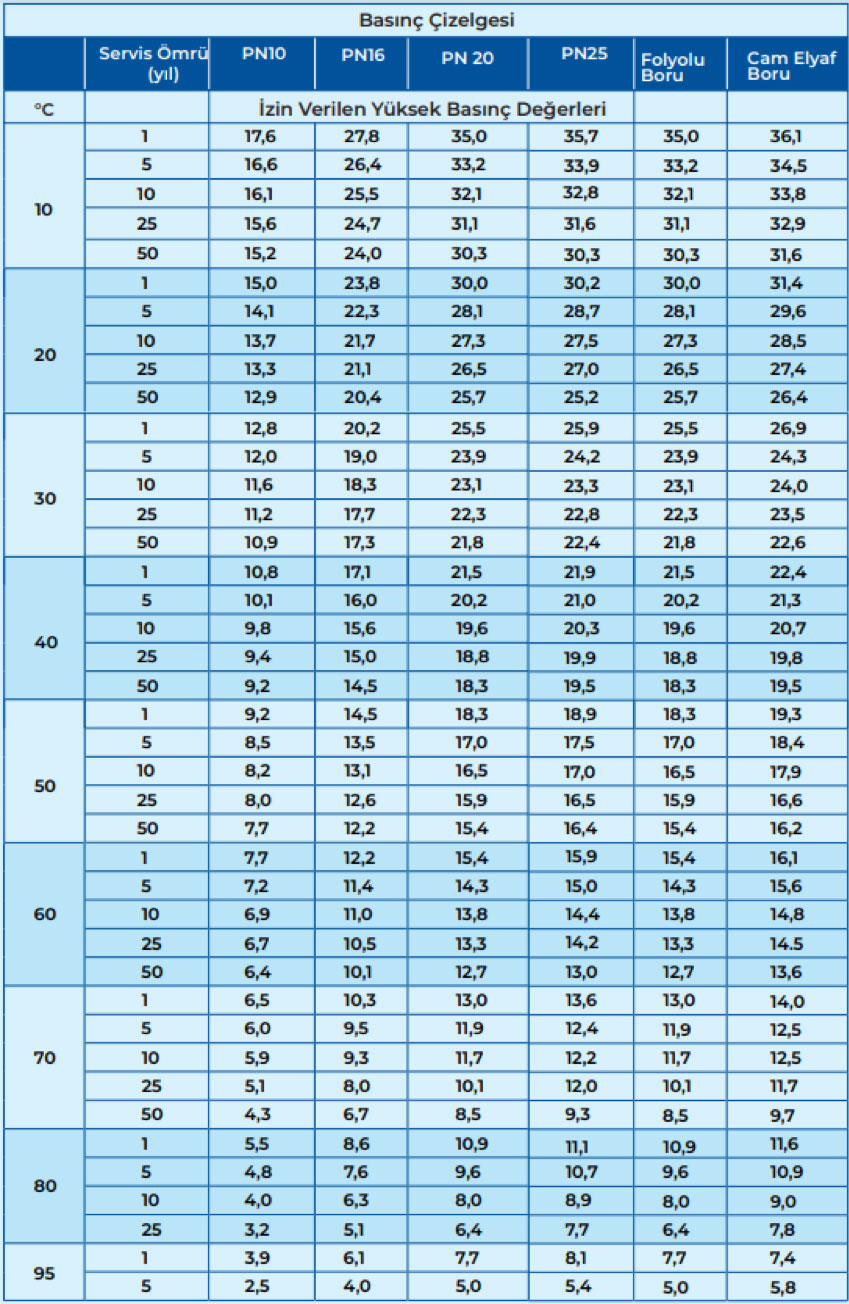 Important Technical Issues in PPR Pipes and Fittings
Flexing Pipe and Its Calculation Due to the structure of the polypropylene material, if the pipes and fittings produced are heat treated, there will be some expansion and elongation. By making the calculation we have shown in the PPR pipes expansion section, the application should be made so that the pipe expands in one direction. If it is not possible to plan the expansion in one direction, a flex pipe should be added. These can be pieces like bows. (Figure 1) 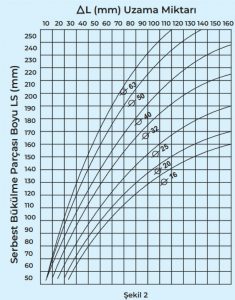 The flexible pipes can be easily used for this process and the system is guaranteed by minimizing the possible errors in the installation. The free bending part length (Ls) can be calculated by the formula or confirmed from the graph in figure 2. For straight installations with a length of more than 5 m, calculations should be made using the formula and the necessary stretch pipes should be used. Elongation calculations in pipes should be done as follows:

Fixed Support and Calculation Fixed supports placed in certain places prevent unwanted expansion by keeping the pipe fixed. At these points, the support resistance should naturally be made stronger than sliding supports. Fixed supports can be made by means of additional parts. However, fixed support cannot be made in the turning parts and direction changes should be made inside the pipe. Fixed points should divide the piping into sections that will allow or not prevent expansion such as elongation and shortening. Generally, expansions such as elongation and shortening are provided by parts such as bows. In Figure 4, the principle is illustrated as a diagram. The formula used is as follows: (∆I = xLx At) (mm) ∆l = Elongation amount (mm) ∆t Change in temperature ("C) L = Pipe length (m) = Coefficient of expansion (mm/mk), Clamp Distances Many factors such as the type, diameter, wall thickness, weight of the pipe and the temperature of the water to be used in the system are effective in the clamp distances of the pipes applied horizontally in Plastherm PPR pipes. These factors are calculated and the approximate clamp distances are given in the tables below. In addition, in installations to be applied vertically, the clamp distances are 1.3 times the horizontal calculations. Clamp Distances in PPR Pipes

Tube Bending Diameter Polypropylene pipes can be bent using hot air (140 ° C) only. Only in this way can it be used by making the insulation of the pipe flexible. No action is taken by direct exposure to the flame. Polypropylene material is flammable and combustible. Recommended approximate bending radii are given in the table below.

Considerations About Insulation in PPR Pipes
Metal or galvanized installations require more filling material and insulation than polypropylene installations. Polypropylene materials seem to be self-insulated because of their low thermal conductivity. There is no need for isolation under normal conditions in PPR installations made inside the building. This self-isolating condition is the biggest factor in minimizing the wall thickness of the pipe and the reinforcement materials used, glass fiber and aluminum foil, to the heat conductivity. However, the place where the system is laid and the size of the system are also very important. Insulation is required to prevent frost and heat loss in hot water pipes. If the installation is made in the external environment or if a part of the system passes through the external environment, that part must be isolated and protected against frost in the winter months. Likewise, if the hot water installation is to be applied longer than the calculated one, the places where the hot water installation passes should be isolated with filling or insulation materials in order to prevent heat loss. It is necessary to take measures against weather conditions in the pipes laid outdoors. Insulation materials will also protect the pipes from external factors. Approximate calculations of the insulation to be made in PPR, foiled and glass fiber reinforced pipes are given in the tables below. Insulation thickness for Plastherm PN 20 pipe 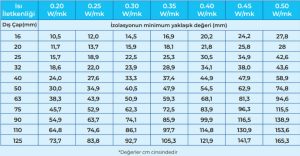 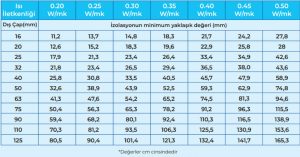 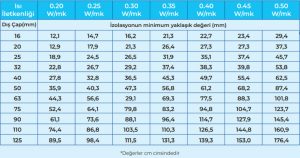